During Hanamene Thornecroft's time with the Inquisition, she managed to unite a small number of Fereldans displaced or escaped from Redcliffe following Teagan’s temporary ousting by Alexius (occurring approximately sometime in late Guardian; early Drakonis of 9:41). Those among them that could ride and fight well enough did so, and the small cavalry unit known as the Drakestone Reserve was consequently formed. Some tension arose as it eventually became evident that said unit's loyalty rested with the people of the Hinterlands, specifically, rather than the Inquisition’s cause or Thedas-beyond-Ferelden overall.

There is no formal ranking system within the Drakestone Reserve, although its members do refer to the D.R.'s founder as either "Serjeant" or "Serj".

Note: all NPCs are adoptable, but OCs can also be members of the D.R. if they wish

Most of the Drakestone Reserve fell in line with Hanamene's loyalty to House Guerrin, though some eventually left the faction over it. What remains of the irregular cavalry now serve as defenders of the Hinterlands. After Thornecroft Cottage was restored, it became their base of operations. 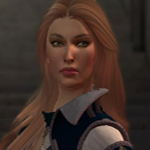